This week Mel shares one of her all time favorite bad sci-fi movies and a cool zombie podcast.  Kelly offers up treasure trove of free(!) TV songs and a movie featuring Beatles covers played over WWII footage.  Really.

A swashbuckling spoof where Pirates attack space ships to steal their booty, namely Ice and the occasional Princess. It’s a dangerous profession, full of space herpes, gophers, killer robots, and the ever present threat of castration. Mel approves. 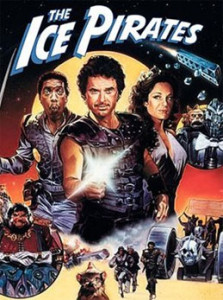 A psychological thriller masquerading as a zombie movie starring Stephen McHattie. A bit of a zombie epidemic overruns a small town in Ontario and is broadcast live over the air by a small town radio station.

Movie/Music: All This and World War II

Kelly: @nightclubfails The good, the bad, and the ugly of getting drunk in public… OK, no “good” actually.  Pretty NSFW.

Mel: @Veronica Veronica Belmont is involved in all sorts of techie stuff on Tekzilla and cohosts the Sword and Laser book podcast and the Vaginal Fantasy book club.

One Response to Episode 9 – Ice Pirates, Zombie Radio, free TV tunes, Beatles… all this and WWII